Why You Should Repair Defective Bushings 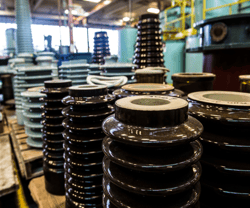 Repairing a bushing is less expensive than purchasing a new bushing and you are able to maintain all of the original dimensions.

PCORE® Electric, an affiliate of Hubbell Utility Solutions, has been repairing bushings since 1982 at their facility in LeRoy, NY. For more information about bushing repair, please contact us at bushings@hubbell.com.