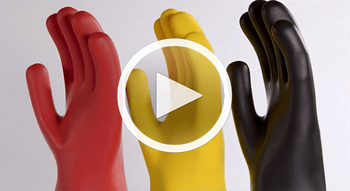 Other major manufacturers use a solvent dipping method to produce their rubber insulating gloves. In this process, the natural rubber from the trees is dried to remove most of the water content. The dried, uncured rubber is then chopped up and dissolved in chemicals, which can include Volatile Organic Compound (VOC) solvents, to re-liquify the rubber.  The VOCs are flammable and can be harmful to the environment. The solvent method can also result in reduced flexibility compared to the aqueous dipping process.

The CHANCE rubber insulating gloves are vulcanized using steam produced in a biomass boiler. This makes the steam effectively carbon neutral. The factory where the gloves are produced is also ISO 14001 certified for environmental management. In summary, the aqueous dipping process produces more flexible gloves with a lower impact on the environment.