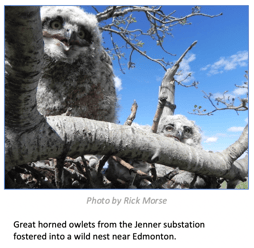 Although we are just starting out the new year and snow is covering the ground in much of the USA and Canada, tis’ already the season for romance and courtship for great horned owls, the largest owl in North America, and one of the earliest “spring” nesters. These majestic birds aren’t much for construction or renovation, and instead take over old nests of other birds such as crows and red-tailed hawks. To the frustration of many utilities, they sometimes choose old nests in electrical substations as their chosen spot to raise a family; these substations offer protection from the elements, a heat source (important when incubating eggs, sometimes in temperatures of -30C), and protection from most mammalian predators, thanks to the chain-link fencing. What they don’t realize is the high electrocution potential for themselves and their clumsy fledging young.

In the grasslands of southern Alberta, Canada, there is one substation in particular where great horned owls nested year after year, starting in about 2005. Not surprisingly, fledgling owls (called owlets) were shocked or electrocuted as they made their first attempts at flying from the nest, including one in 2010 and two in 2011. This was not only concerning from a wildlife conservation perspective, as raptors are protected by wildlife legislation, but these incidents also led to power trips for their customers, most of which were oil companies running large operations.

AltaLink, the transmission company that owns the substation, was keen to find ways to prevent these owls from nesting within the substation, but they first had to find the nest site. For years, the owl pair proved to be vanishing magicians and despite many efforts to find the sites, deploying both substation personnel and experienced biologists at multiple points throughout the nesting season, AltaLink was mystified as to where these owls were nesting. They determined that in the meantime, they needed to protect that substation to reduce the chance that the young would flop around on exposed energized equipment. To accomplish this, they called in Greenjacket. The substation was partially covered with the Greenjacket solution in the summer of 2011. 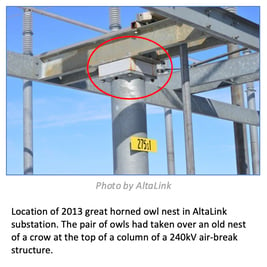 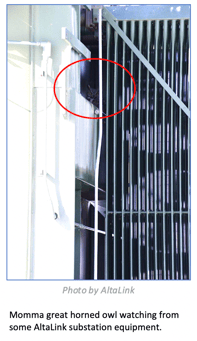 In the spring of 2012 and 2013, the owls returned! But fortunately in both cases the nests were found, in the metal channel of a 240kV post insulator (2012), and in the column and gussets of a 240kV airbreak structure (2013). To protect the young, they were removed from the nest and raised by a wildlife rehabilitator (2012), and fostered into other wild owl nests (2013). 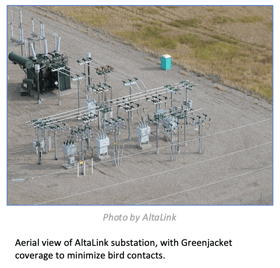 Now that the nest sites were discovered, the question of how to exclude them could finally be tackled. Covers for that kind of equipment do not exist, so AltaLink knew a unique solution was needed. Once again they contacted Greenjacket. Because the Greenjacket solution is a custom-fit product, they were able to make unique covers for all similar spots within the substation, excluding the owls from nesting in this hazardous location! Additional Greenjacket was applied to fully cover the remaining exposed electrical components. Since then, there have been no known nesting attempts, and thus, no electrocution of young. Further, Greenjacket has been applied to over 100 AltaLink substations to date, and has dramatically reduced bird contacts. Owls well that ends well!