You’ll probably never see anyone trying to use an elbow-puller tool for anything except what its name implies. However, you are likely to find many who attempt pulling elbows with other tools, most commonly a shotgun stick.

Using the wrong tool for pulling elbows can result in connection problems and compromise worker safety.  There have been cases where the elbow seemed to be glued to the transformer, and the transformer was actually moved off of its foundation. 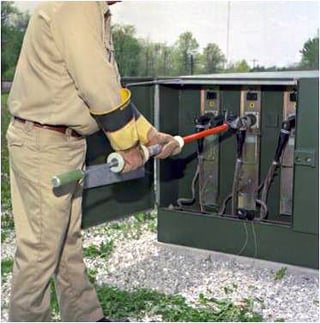 When both the elbow and bushing are new and the grease is fresh, they will come apart fairly easily. But their union can become quite “binding” over time in service. As the grease ages, it can have a reverse effect, becoming like glue, and actually sealing the two parts together. This “glue like” effect can make it so hard to pull the elbow that the pulling eye may break.

With a shotgun stick, line workers have minimal leverage when trying to disconnect the elbow, having to put undue strain on their back, legs, and shoulders. They can possibly even lose their balance and fall when the elbow finally does come out or the pulling eye breaks.

Wrestling the elbow off with a shotgun may eventually succeed, but at times the probe in the elbow is left damaged. When reinserted in the bushing it may seat improperly, which could cause a poor connection and eventual service issues.

In the worst of these situations, safety rules — not service or tools — get broken. So frustrated, a line worker may be tempted to violate safe working practices by removing an elbow with rubber gloves only.

These risks are unnecessary when we have a hot stick made specifically for this job. The elbow-puller tool combines the grasping action and impact force required to safely separate an elbow from the bushing.  The grippers hold on to the body of the elbow, not just the pulling eye, and align the tool to avoid damage to the probe. The 5-lb. slide hammer provides the necessary impact force, and helps you stay in control.

This is a classic case of using the right tool to do the job right. The elbow-puller tool can help avoid costly damage to equipment and personal injury.