During the early development of the screw anchor, the load resistance of an installed anchor could not be predicted with adequate accuracy. Specific information on soil conditions was lacking, making anchor selection more or less a guess. With little consideration for soil variations, the effects of seasonal weather changes or drainage, soils were classified as: either sand, clay, hardpan or swamp. At that time, there was not a definitive explanation for the soil conditions.
Initially, it was necessary to obtain soil samples from the projected anchor depth in order to classify the soil and to make anchor recommendations. However, this method was inconvenient, expensive and time-consuming. CHANCE® soil classification data enabled more accurate anchor holding capacity predictions.

Engineers developed the “soil test probe”, a mechanical tool which makes it possible to infer subsoil conditions from the surface of the earth. The soil test probe is screwed into the soil. As it displaces the soil, probe installation torque is measured in inch-pounds on a torque gauge, which is an essential part of the installing tool. Probe torque readings are then compared with the information on the CHANCE soil classification data chart and translated into the appropriate soil classification.

More than 50 years ago, utilizing the power of digging equipment to install screw anchors was introduced. The system consists of a screw anchor, anchor rod and a special installing wrench. Each anchor has a galvanized steel threaded anchor rod with an upset hex; single or twin helices and a galvanized guy wire nut which is screwed to the anchor rod end. Power Installed Screw Anchors (PISA®) can be installed in a matter of minutes.

Later, the installation method was improved with the development of CHANCE® torque indicators and sets of holding capacity values for given anchor types. This strengthened and simplified the soil classification data. Now, a utility employee can install a PISA anchor to a given torque value and predict, with relative accuracy, the holding capacity of the installed anchor.. The correlation between installing torque and anchor performance, required thousands of tests throughout the United States. Labor, engineering, research and investments made the development of this reliable anchoring philosophy possible. 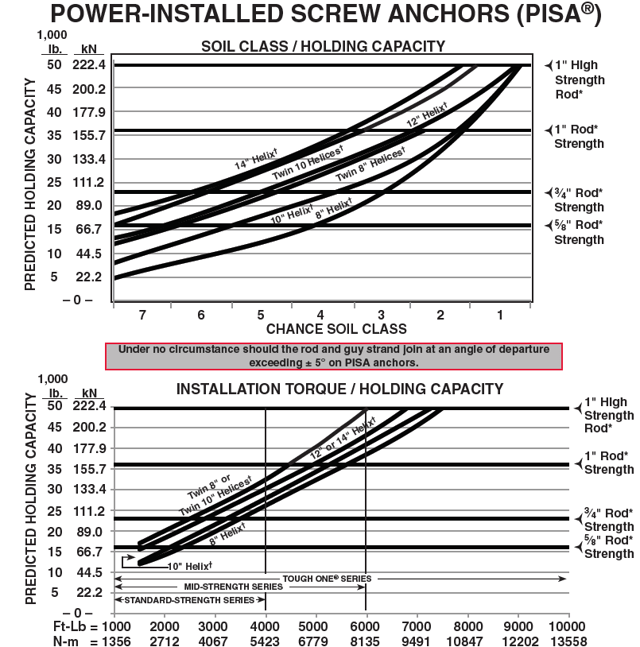 Screw anchors are designed and manufactured for maximum torsional strength. During installation, it is possible to apply more torque than the anchor alone can withstand. Some of the torque applied by the digger, and measured by installation torque indicators, is dissipated by friction along the wrench and not applied to the anchor itself.

Anchors are rated by maximum working torque or, for the more recent designs, by the 5% exclusion limit which is a more explicitly defined criterion based on statistical analysis of on-line quality control testing.

Both ratings take into consideration the variation to be expected in anchor torsional strength due to normal variations in materials and manufacturing processes. Customers should consider this variation along with the wide variation that can be seen in the frictional loss along the wrench in deciding how much torque can be applied safely during installation.

The fact that CHANCE ratings are set along the minimum credible torsional strength also should be considered in comparing CHANCE ratings to those of manufacturers who rate their anchors based on average strength.

Predicted ultimate holding capacities are based on results of extensive CHANCE tests and interpretation and are offered as an application guide only. They do not represent a guarantee of holding capacity in a particular soil class. A user must factor in his individual, appropriate safety factor.

Under no circumstance should the rod and guy strand join at an angle of departure exceeding ± 5° on PISA anchors.

CAUTION: ALL COMPONENTS OF THE CHANCE ANCHOR­ING SYSTEM ARE PERFORMANCE MATED. USE OF OTHER ANCHORING PRODUCTS OR EQUIPMENT WILL NOT NECES­SARILY PRODUCE THE SAME RESULTS.